CLICK HERE to Check out our ACTIVE CLUBS with their

If you are seeking the endorsement of the 12th Congressional District Democrats, please fill out this questionnaire by June 8th, 2020.

Please see the following graphic for information from the Michigan Democratic Party on remote voting procedures for district-level delegates to the DNC National Convention.

If you would like to vote via mail-in ballot, please request one using this form by MONDAY, MAY 4th:

We have received guidance from the Michigan Democratic Party as to remote procedures for applying to run for one of the delegate positions to the 2020 DNC National Convention (now planned for the week of August 17th, 2020).

Here is information from the party on who is eligible to run and who can vote:

Who is eligible to run as a district-level delegate?

An individual can qualify as a candidate for district-level delegate to the 2020 Democratic National Convention by joining the Michigan Democratic Party and by filing a statement of candidacy designating their singular presidential preference and a signed pledge of support for the presidential candidate with the Michigan Democratic Party by 5:00 pm on April 16, 2020. In order to limit the need for party members to leave their homes, we will now accept delegate applications via email at [email protected] or online. The online form can be found here.

2. Members of the Michigan Democratic Party at least thirty (30) days prior to May 16, or by April 16, 2020. Individuals whose memberships expire inside the 30-day window are eligible to participate if they renew on or before May 16, 2020. Click here to join the MDP.

More information regarding voting procedures will be sent out soon. Voting will take place between Thursday, May 7th and Saturday, May 16th.

The next meeting of the 12th Congressional District Dems will be this Thursday, November 14th.

Hayley Alderman, the director of Party Affairs at the MDP will be speaking about the party's delegate selection plan. See you there!

12TH DISTRICT ENDORSEMENT REQUESTS: Endorsement requests for the 2019 election cycle are due to the 12th District by FRIDAY, SEPTEMBER 20TH. Please send all requests to [email protected] Endorsement screenings will take place at UAW Region 1A on October 1st.

The 12th Congressional District is pleased to endorse the following candidates in their respective elections on Tuesday, November 7th, 2017:

The 12th Dems will have their October membership meeting on Thursday, October 12th!

Written requests are due by September 21st.

Following submission, you will be contacted with a screening date and time.

Let us know if you can make it, click HERE.

Donations can be made online via ActBlue

The Spring State Convention of the Michigan Democratic Party will be held at the Cobo Center in Detroit, Michigan on Saturday, February 11, 2017. Registration begins at 7:30 a.m. In order to hold Party office or vote at this convention, a person must be a member of the Party for at least thirty (30) days prior, or by January 12, 2017. View Convention Schedule ➔ View Convention Guide ➔

email us at [email protected]

You can pre-purchase your tickets with the link below.
www.tinyurl.com/12th2016dec

CLICK HERE to volunteer for Hillary and Dems Up and Down the Ticket!

WE need you to sign up for as many volunteer shifts as possible for GOTV!

Invite you to the 12th's Steak Fry Fundraiser!!!

*Steak, sides, and beverages will be provided

This election is like none we have seen before and there is much at stake. We need all of you engaged for the next 47 days. One of the most important activities will be the three debates between Hillary Clinton and Donald Trump. I know the difference will be striking between Hillary, who is the most experienced candidate for President as President Obama himself observed, and a candidate who quite frankly scares me.

The first Presidential debate is this Monday night, September 26th, at 6:00pm. There will be a number of viewing parties throughout Michigan, but hope you'll join us in attending one of the watch parties here in the 12th district. 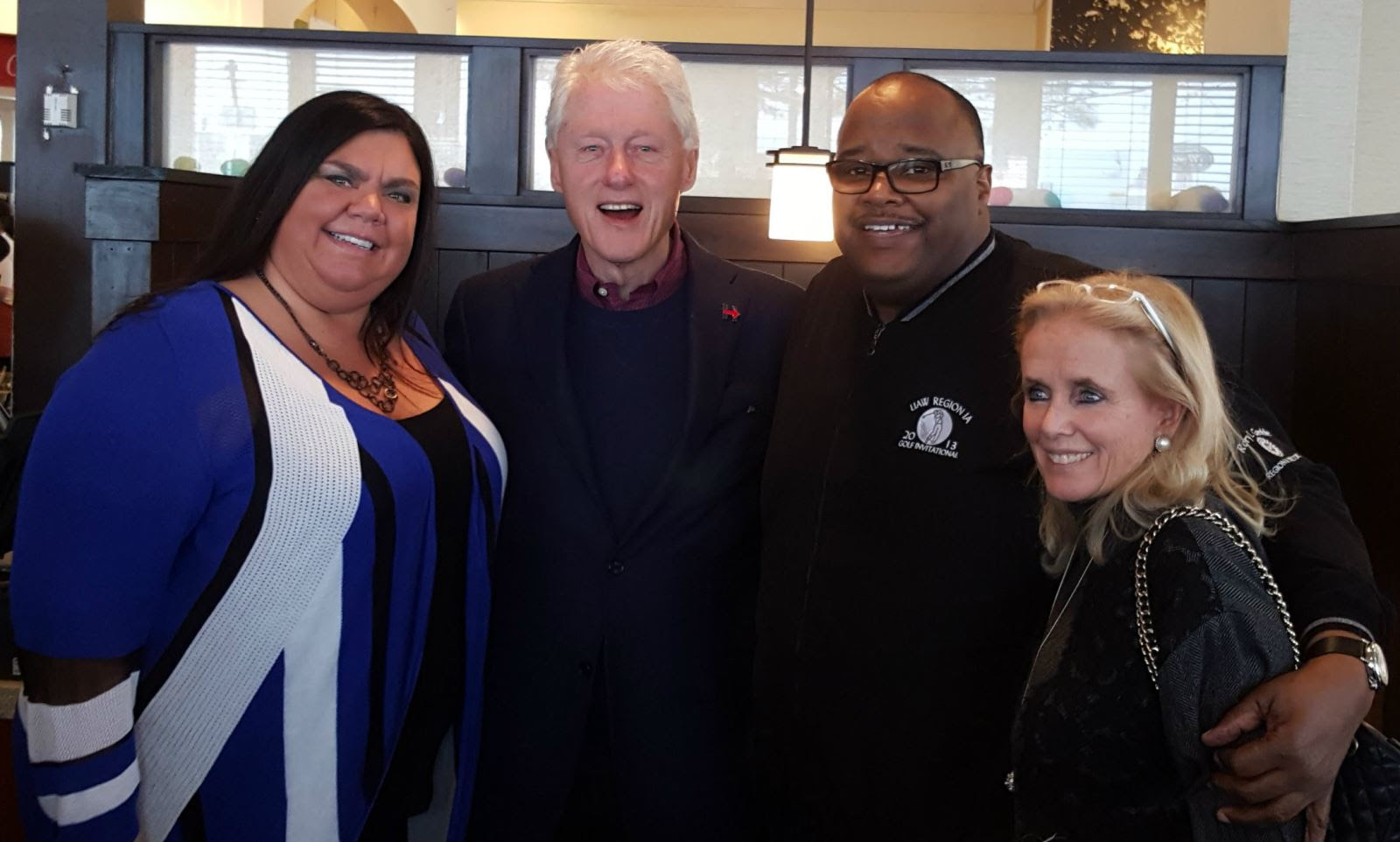 Hillary's amazing on the debate stage, and there's nothing better or more motivating than watching with a bunch of other supporters. Even better, I know how much it will mean to Hillary to know her team is cheering for her all over the country. Join other friends to watch a very important night that will impact the future of all of us.

(Near the corner of hamilton and Michigan)
If you're able to attend, please RSVP HERE so that we know how many folks are coming

The 12th Congressional District Convention will convene at Region 1A, 9650 South Telegraph Road, Taylor, MI 48180, on Saturday, August 13th at 10:00am. Registration will begin at 9:00am and continue until 10:00am. The purpose of this Convention shall be to elect Members (1 male, 1 female) and Alternates (1 male, 1 female) for each of the three State Convention Committees (Rules, Credentials, Platform & Resolutions).

Article IV Sections B & C of the MDP Rules stipulate the following qualifications for candidacy and eligibility to vote:

In order to hold Party office or vote at any Convention, Caucus, or meeting at any unit of the Michigan Democratic Party at any level, a person must be a member of the Michigan Democratic Party for at least thirty (30) days prior to that Convention, Caucus, or meeting. A Party member must be a qualified elector in order to vote on nominations for public office.

Voting delegates will include:

For the business of the convention, Robert’s Rules of Order will be used, as well as MDP proportional voting, if other than voice votes are called for, and voting procedures will be chosen by the convention.

"State of the County Community Updates" that Wayne County CEO Warren C. Evans will be holding.  The first is to be held on the eastside of Detroit on Tuesday April 14; the Downriver one will be this upcoming Thursday April 16 at WCCCD-Downriver.

David Hecker, President of American Federation of Teachers in MI
He will speak on the recent plan for
Detroit schools that was submitted to Gov
Snyder. He will also talk about Education challenges in
general, charters , funding, and the legislature

Kevin Hrit Update On Two Year Plan for the 12th

Visitation is Thursday 4-8pm with a Trisagion service at 4:45pm at the John N. Santeiu & Son Funeral Home, 1139 Inkster Rd., Garden City (Between Ford Rd. and Cherry Hill.). In state Friday 8:30am followed by the 9am Funeral Service at Sts. Constantine & Helen Greek Orthodox Church, 36375 Joy Rd., (east of Newburgh).

Friends I am sad to inform you that Representative Jim Plakas passed away on March 30th. Jim Plakas was a good friend to all people of his District. He served our region in public affairs very well, and always with his huge heart and deep concern for the well being of regular Americans. Many of us engaged in politics knew Jim Plakas personally, and a kinder, more concerned honest and hard working public servant could not be found.

An Appreciation Night for Richard Miller

Please join us for an evening honoring Richard Miller for

Potluck Dinner will be served

Our very own Congressman John D. Dingell will receive the Presidential Medal of Freedom, the nation’s highest civilian honor, from President Obama on November 24th.  On behalf of the 12th Congressional District Democratic organization, I would like to congratulate Congressman Dingell on this prestigious award.  This is a well deserved honor for his six decades of service to the citizens of the great state of Michigan and to our nation.  We are all better off because of his work in Congress, and his impact will be felt for generations to come.

I think I can speak for everybody in the 12th District in that we are inspired by Congressman Dingell's tenacity, grateful for his efforts, charmed by his humor and honored by his friendship.

About the 12th Congressional District Democrats

Welcome to the 12th Congressional District Democratic Organization website!  We hope you will find this interactive site a useful resource for all things Democratic here in the Mighty 12th.  Our mission is to build a strong party organization and to elect Democrats to public office here in Wayne, Washtenaw and our neighboring counties, all the way up to the Federal level.

We meet every 2nd Thursday of the month at 7pm.


Please sign-up for our emails to keep up-to-date on upcoming 12th District events, meetings, and news!

You can join us using

Paid for by the 12th Congressional District Democrats, 19855 W. Outer Dr., #103AE, Dearborn, MI 48124, and not authorized by any candidate or candidate committee.

Created with NationBuilder – Theme by Tectonica